I take it as given that we all agree the path to Financial Independence should not include shoplifting, fraud or mugging little old ladies.

But let’s take the concept of honesty a stage further.

I have been experimenting recently with Radical Honesty.  This means saying everything you think, without stopping to worry how people will respond.

I got this idea from a James Altucher podcast with AJ Jacobs.  Jacobs experimented with living radical honesty for a month and wrote an Esquire article titled I think You’re Fat which I highly recommend – its very funny and thought provoking.  Jacobs estimated he reduced the daily lies he told by about 40% but quickly realised that you can never achieve 100% honesty without social ostracism.

Back at work, I often used to be sat in a meeting, people would be prattling on and someone would ask me what I thought.  I always resisted the temptation to give a 100% honest answer. This was probably for the best.  If I had been radically honest I might have said something like:

Well, to be honest I don’t really want to be here. I’m bored and thinking about what would happen if I stapled Joe’s tie to the desk…or threw a chair through the window…or what Sophie from marketing would look like wearing only coconut oil and a smile.

This type of honesty is career limiting and is not recommended when you are still in the wealth gathering phase in the Prison Camp.

I don’t think true honesty is ever possible in an employer: employee relationship where the employee needs the job.  In the Prison Camp we learn to laugh at the boss’ jokes.  How can an employee ever be fully honest in a relationship where they can only service their mortgage if they keep their job?  I think of pure honesty as being like pure freedom – its a luxury good that you can only really afford when you are financially independent.

There is a place for lying. Lies are needed to spare other people’s feelings.  Little white lies are at the heart of all etiquette and polite communication.  The more polite you are, the more likely you are to tell well-meaning lies.  I can tell you from experience that above average honesty can often be taken as above average rudeness.

I break down honesty into 2 parts: Truth and Openness. Truth is simple. A statement is either true or false in the same way that you are either pregnant or you’re not.

Openness is harder to measure objectively.  Its how much of our inner thoughts we reveal to the world through our words and actions.  Its about volunteering more information and removing the filter between what you think and what you say.

Openness to others implies vulnerability.  By revealing more of our innermost thoughts than before, we are taking emotional “risks” and relying to some extent upon the basic kindness of (most) other people.  When you are open about your flaws and failings, you are acknowledging your vulnerability.  Being able to do this is actually a sign of strength.

I have always been a (relatively) truthful person but for years I was terrible at openness. In my defence, I started with the disadvantage of being a straight white British male, vintage 1970.  But this blog is all about overriding our evolutionary biases with a little bit of personal growth.  Its always possible to raise your game, particularly when it comes to openness.

I hope you can see the links to financial independence here.  A huge part of the journey to FI is getting comfortable with following our own path and stopping worrying about what everyone else around us is doing or thinking.  Everyone focusses on the money part of the journey to FI and that is understandable. But having enough money is necessary but not sufficient. You are also have to be honest with yourself about what motivates you.

by Stephen Covey.  Covey recommends we should live in accordance with our core beliefs to remove any dissonance between our inner thoughts and our daily actions. 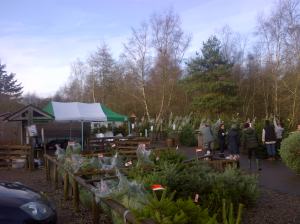 This is not Bluewater

For example, as someone that believes in living more naturally, it felt better to buy my Christmas tree from my local forest rather than driving to a mall to buy some plastic shite from China.

Reading the 7 Habits helped me towards a more honest approach to every aspect of my life.  It was a relief to stop prioritising beliefs and actions pushed at me by other people: advertisers, clients, work colleagues, even well-meaning family or friends.  I saw that my priorities had become misdirected whilst in the Prison Camp and needed to change.

My favourite TV programme of all time was the US series House where Hugh Laurie plays a genius doctor with a poor bedside manner.  One of House’s catchphrases is “Everybody Lies”.  He takes patient histories but doesn’t naively assume that the patients are being truthful.

House puts results above everything else.  To get these results, he frequently plays games, manipulates and tells lies but is ultimately redeemed by a strong underlying integrity and set of ethics. House is a flawed character but is always ruthlessly honest with himself and ultimately with the people he cares about.  Similarly, The Escape Artist may tell the occasional little white lie (oops…there goes another one) but I am always ruthlessly honest with myself, particularly about money.

People that run up debts are not being honest with themselves.  If you have to borrow to buy something* that means you can’t afford it.  Debt allows us to lie to ourselves and, by implication, to others about what we can afford.

Most people driving around in a Maserati or Mercedes bought on finance are misrepresenting their net worth to others. Imagine if there was a law saying that cars bought on finance had to have a notice painted on them – a bit like a health warning on a box of cigarettes.  This might say something like “This car is not owned by the driver. The bank is just renting it to them. He / she is living above his / her means but wants you to think they are wealthy so they appear more attractive / successful“.  The car finance market would dry up overnight.

In surveys up to 90% of people consider themselves better than average drivers, friends, investors or lovers. This can not be true. Unlike people, numbers and logic do not lie.

Almost the entire active fund management industry is based on a form of dishonesty – the idea that it is possible for most people to outperform the market.  Simple logic dictates this can not be the case. If active fund managers were honest, their advertisements would say something like:

We know that your returns after our fees will on average lag those available from a low cost index tracker.  We are going to make only token efforts to beat the index and will not try so hard that we ever risk doing something different from the herd and hence losing our cushy jobs.  Lets face it, most years we are going to fail miserably whilst continuing to collect a salary that is about 10x greater than that of our average client.

The idea that we can avoid mistakes in investing is intellectually dishonest.  Yet when did you last see a fund manager fessing up to mistakes and giving equal prominence in their investor newsletters to the “problem children” stocks in their portfolios as to the “stars”? If people were honest about investing they would acknowledge that the emotional side of investing are as important as the intellectual aspects.   Applying the insights of behavioural finance requires honesty and self-awareness.  Once you have recognised this, most good investing boils down to avoiding doing stupid things driven by emotion.

We can all move along the spectrum towards fuller honesty. For me, part of this is being open about how and why I got to FI.  Everything on this website is as honest as I can make it at this point in my life.

This includes being open about my underlying motivations for financial independence. Being honest, fear was the main driver in my achievement of FI.  I was blessed or cursed with an irrational fear of poverty which is, I think, part inherited and part down to my childhood.  Because of my irrational fear of ending up poor and eating mouldy catfood out of the tin, I always found saving and frugality natural, almost therapeutic.  I have now mostly ditched the fear but I still get twinges.

I now enjoy people’s reactions when I say stuff that is unusually honest and open.  I’ve found that most people react positively to this and respond in kind. You then both gain better quality interactions from that point onwards.  A minority (the more emotionally repressed) get a bit uncomfortable when confronted with openness.

The City is full of outwardly successful people who are deeply fucked up, having devoted their entire life to money and lost sight of everything else.  Its funny to watch these people look awkward when I use the phrase “my Journey” (and I’m not talking about the 6.28am into London Waterloo) or being “in the moment”.  I haven’t read any Zen Buddist texts yet, but I reckon a few choice quotes would allow me to tease these people even more effectively.

* except a house, combine harvester, computerised lathe or other big ticket productive asset that can hold / create value

← 10 years out of the Camp: Reader Case Study
Investing with the Automatic Pilot →