Now you see it…

There came a point during my time in the Prison Camp when it felt like money was leaving our bank account like blood spurting out of an arterial wound.

This feeling was particularly acute whenever we had work done on our house. I would get back from a long day at the office and it seemed like there was a stream of tradespeople flowing through the house: plumbers, electricians, tilers, painters, gardeners, feng shui consultants etc.

It hurt me to think about the cost of keeping this army fed and watered. They were all lovely people, no doubt, but I felt like I was single-handedly funding a government programme to GET BRITAIN BUILDING.

Unfortunately, work consumed ever more of my time and my brain got ever more frazzled. So my inclination to do physical work myself got ever more limited.  Lets face it, I started off with roughly the same level of DIY skills as Paris Hilton and it was downhill from there on in. Other than my “O” Level Metalwork (Grade D, since you ask) I had never received any training in handyman type activities.

Instead, at school I learnt about assorted horrors of the industrial revolution, the plight of the working class in Eighteenth Century England and the Japanese Army’s treatment of Allied prisoners of war in World War 2.  This all made a lasting impression on me. After that, when people told me that hard work never killed anyone a) I knew that wasn’t true and b) even if hard work probably wouldn’t kill me, why take the risk?

As a soft, middle class professional I somehow absorbed the incorrect idea that manual labour was a “Bad Thing”.  This was partly my own wimpiness and partly a cultural belief absorbed from my fellow office workers.  I’d seen The Shawshank Redemption and the longer I spent in classrooms, exam halls, offices and meeting rooms the more I came to believe that manual labour was a bit like going to prison: an awful prospect for a nice, middle class guy with soft hands.

As a result, I’ve never been DIY minded and tended to take the soft option of throwing money at the problem and outsourcing the work to others.  This seemed to make sense at a purely monetary level. From an economist’s perspective, if I could earn more per hour than the cost charged by the tradesman, then why not outsource the work?

There were several problems with this. Firstly, I was paying a shit load of tax to pay people out of my after-tax earnings.  It felt like I was being cut in for the minority share in the same way that a low level drug dealer has to pay the majority of his earnings up the chain to the Big Fish or get his legs broken.

Second, the economist’s way of looking at the world makes sense if you are talking about lower cost versus higher cost machines but does not apply to real human beings.  Forget about the relative wage costs for a minute, it is good for the soul to be able to use your creativity and fix different things. Outsourcing was turning me into one of the pathetic wimpy people from Wall-E who are helpless when their electric chairs and soda delivery devices malfunction.

It used to seem like the tradespeople had all the power.  We would helplessly tell them about latest thing to break down. They would shake their head, make tutting sounds, suck their teeth and gravely deliver the bad news that this was gonna cost us a shit load of money. I would then slink back to work to try to make back the money we were paying them.

Well, recently I have started to make baby steps to become less of a soft-as-shite middle class wimp.  I started small…my first manual labour triumph after leaving work was…wait for it…changing the brake blocks on my mountain bike.  I know!  You may well scoff but this represented real progress for me.

I always used to have a phobia for bike maintenance so I would hand my bike over to the bike shop to maintain…a bit like a spoilt Princess handing over her polo pony to a stable boy.  Since I quit work my attitude has been…fuck that, its time to man up. So my hands got dirty, the brake blocks got fitted and I now have brakes that really work. If you have not experienced the joy of being able to lock up the back wheel of your bike for a good long skid, then there is something missing from your life.

We recently had a triumph over the tyranny of the tutting tradespeople that I want to share with you.  We had a uPVC conservatory on the back of our house, inherited from the former owners.  It was a bit ugly and when my wife decided that it had to go, her first instinct was to get a quote to pay someone to take down the conservatory and remove it.

The quote was £900 to do this and re pave part of the patio under the old conservatory.  I pointed to my sledgehammer and protested that we shouldn’t be paying for this and that I should have a go at it myself.  How hard could it be?  My wife wasn’t keen. She had concerns that my amateur demolition enthusiasm might exceed my level of competence.

Desperate to avoid me starting to smash things, my wife put her thinking hat on and talked with friends and family about the best way to approach the problem.  This was a great example of using crowd-sourcing to get a solution.  The answer came back from her sister (who is a bit of a frugality ninja)…put the conservatory on EBay and let people bid for the privilege of taking it away.

This was genius. To be honest, I should have thought of this myself.  There I was cursing – if only there was a network connecting computers around the world that could allow people to share information, ideas and trading opportunities with each other. Then someone could invent an auction tool that let you sell stuff you don’t need to people from other towns who want that stuff. 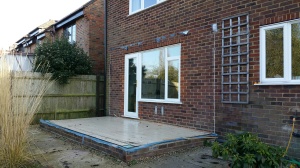 Although this was a good result, there is a broader learning point for me here.  We need to man / woman up and stop thinking of physical work and problem solving as things that are either beyond us or something to be avoided and passed to “experts” wherever possible.

We evolved in an environment where we needed to do stuff ourselves.  Extreme workplace specialisation is a function of the last 100 years or so, a mere nanosecond in evolutionary time.   If all you do is prepare management accounts, format web pages or write adverts you will eventually go mad. We need natural challenge and variety, overcoming problems using a mixture of brain and brawn.

There are others that can explain this stuff from a position of greater authority than The Escape Artist.  If you want to go deeper, I recommend the snappily titled book: The Case for Working with Your Hands or Why Office Work is Bad for Us and Fixing Things Feels Good.

As another step on my road to redemption, I’ve recently put myself in the strange but enjoyable position of doing unpaid manual labour.  I volunteered for Surrey Wildlife Trust and have been doing hedge planting, scrub clearance,and other woodland conservation work. The work is really physical – you are working in groups with saws, cuttters etc and do stuff like figure out the best way to take down invasive coniferous trees, ideally without hurting the other people around you.

This has destroyed my preconceptions about what makes rewarding and high status work.  I spent years indoctrinated against manual labour and now I find myself lugging tree trunks and shovelling stuff into trailers pulled by Land Rovers.  Working outdoors doing physical work like this is satisfying and good for the soul.

However, there are some side-effects to watch out for.  You may experience fat loss and get strange lumps appearing on your body.  Naturally I was concerned about this and went to the Doctor but apparently these lumps are something called “muscles” and are nothing to worry about.

Its funny, I escaped the Prison Camp and how do I now choose to spend some of my hard won leisure time? By working outdoors with other people doing unpaid physical work.  Hold on…if I wanted to do unpaid physical work outdoors (like breaking rocks with a sledgehammer), couldn’t I have done that in prison?

Leave a Reply to The Escape Artist Cancel reply

← Are diamonds really a girl’s best friend?
The Aggregation of Marginal Gains (Part 1) →

Are you taking enough risk in your career and in your investing?
Why it feels hard sometimes
Let's go outside! ☀️ 🚴
New post: There Is No Such Thing As 100% Safety, There Are Only Trade-Offs
And now in military green...