The value of having options 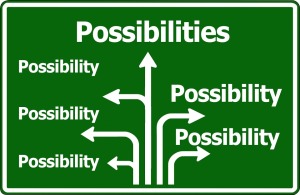 Options are valuable in finance and in life.

Let’s play a fun game.  I’m going to ask you to guess the value of an option.

I’ll then show you how to calculate the answer, so you can compare your guess to the model answer.

Bear in mind that at all times you have the ability to buy / sell the FTSE 100 in the market (for example via a Vanguard index tracking ETF like VUKE). So it would only make sense to exercise the option if the FTSE 100 had risen above 6,191.

What, if anything, would you pay for that option?  Have a guess and write your answer down on a piece of paper.

If you’re struggling, don’t worry; that’s normal.  We humans aren’t designed to do calculations like this in our heads.  There wasn’t much call for it on the African Savannah.

So if I asked people on the street to guess, I would get baffled looks and a wide range of answers.  I expect a lot of people would answer zero because the option is currently “out of the money”.

Well Britain will vote to leave the EU and then interest rates will go up and that would cause a recession and then there will be another financial meltdown and the FTSE will be at 5,000 in 10 years time…so I don’t want to buy an option that allows me to buy it at 6,191

Wow. My head hurts just writing stuff like that.  The problem is not that it’s impossible that the FTSE 100 could be at 5,000 in 10 years time (although I think it’s pretty unlikely). It’s that nobody knows what’s going to happen. The value of an out-of-the money option lies in the fact that things change. So a rational investor would still put a positive value on an out of the money option.

But most people are not purely rational investors.  And, as Nassim Taleb explains in Fooled by Randomness and The Black Swan, we consistently tend to undervalue options and underestimate the impact of unforeseen changes while overestimating our ability to predict the future.

The problem with many conversations about investing is that people end up as amateur forecasters.  Because investment returns happen in the future, people often assume that some ability to forecast the future must be an important part of investing. Don’t get me wrong, it would be great to know in advance which horse is going to win the 3.30pm at Haydock or what level an index is going to be on a future date. It’s just that I’ve never met anyone that can actually do this.

I have noticed however that a lot of people talk as if they could.  If you watch any financial TV or visit a pub, you will find pundits (mostly middle aged males) recycling what they read in the paper earlier that day and then making confident predictions about the future, safe in the knowledge that no one is ever going to check on the outcome. 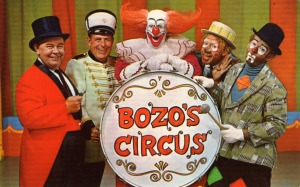 The only thing worse than an amateur forecaster is a professional forecaster.  They’re dangerous because they look and sound like they might know what they are talking about.

If you are watching TV news and you see an interview with clowns disguised as economists or analysts from an investment bank, the sensible thing is to turn your TV off and do something useful.  If you can’t find the remote control, run out of the room with your fingers in your ears shouting LA-LA-LA-NOT LISTENING, NOT LISTENING!

One of my ex bosses had a talent for this stuff.  Whenever a client asked for his view on the economy he would flow smoothly into an eloquent speech about The Fed, non farm payrolls, house prices, interest rates, investor sentiment blah blah blah…always culminating in the same conclusion that, on balance, he was cautiously optimistic and now was a good time to do whatever he was trying to persuade the client to do.

The Escape Artist claims no ability to see the future.  If I have an edge when investing, it’s that I realise how little I (and everyone else) actually know about the future.

Back to the option. The reason it has value is that there is always uncertainty. Prices can always move by enough to bring the option into the money (the FTSE 100 is trading above 6,191) by expiry.

There are 2 parts to the value of an option.   Firstly, the intrinsic value.  Think of this as the value if the expiry date were today.  So in our example, an option to buy the FTSE 100 at 6,191 has zero intrinsic value when the current market price is 6,190.

Fortunately, we don’t have to rely on guessing to value options.  The Black–Scholes options pricing model is based on some fancy maths and won its inventors the Nobel Prize in Economics.  The model is not perfect.  It tends to underestimate the value of an option where the underlying probability distribution of stock returns is not a normal “bell curve” distribution and instead has “fat tails”. 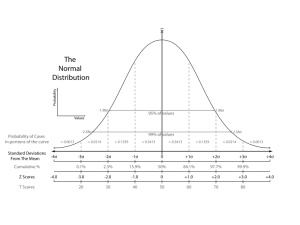 But in the real world, big market moves are pretty common.  During the crash of October 1987, the S&P 500 fell by 29% over the course of 24 hours. With a normal distribution, this should happen less than once every billion years.

But despite tending to understate option values, versions of the Black-Scholes model are widely used. And, to be fair, most of the time it works a lot better than guessing.

So those people that guessed zero for the value of the option would have been way off. And remember this may understate the true value. Still wondering why CEO’s are so fond of option packages?

The reason this matters is not because I think you should use traded options in your investing.  Option trading is best left to daytraders like Frankie or hedge funds.

The first reason option valuation is important is that it reminds us that things that at first glance don’t look valuable, might be (and vice versa).  And that things change. We humans tend to try to predict the future using simple extrapolation of the recent past.  If the sun has shone everyday for the last month, you’re less likely to take your umbrella out with you tomorrow. 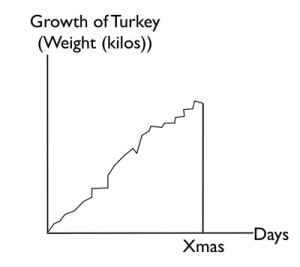 This encourages investors to “reach for yield”. Investors in peer to peer lending, high yield bonds and emerging market government debt are usually hoping that the future will be like the recent past.

They focus on a juicy promised yield, hoping it will be maintained and their capital won’t be wiped out in a default.  Taleb compares this to a turkey looking at recent past in the run up to Christmas and expecting the farmer to continue to feed him.

So whenever you lend money, remember that the borrower has an (unofficial) option to default.

The second reason that option pricing is important is that it reminds of the uncertainty inherent in life and prompts us to look for valuable “real options” in our lives. The ability to recognise options wherever they crop up is a useful skill.  Most options that we run into in everyday life are not clearly labelled as options…they just look like life choices.  But these real options are valuable.

One reason that experimentation is valuable in life is that it’s like being given free options. As an example, if you write a blog as an experiment, you gradually get the option of taking some of the material, adding new material and turning it into a book.  By writing this blog, I’ve met new friends and interesting, smart people who I would never otherwise have met.  More options.

Or think about someone who trains as a plumber. As well as a new skill, they gain new options: to set up their own plumbing business, or get a job with an established plumbing company or perhaps to write for about plumbing for a trade magazine.  You don’t have to know at the start which path you will end up taking…you get options. (Talking of training as a plumber, I discovered a few years ago that one firm of London plumbers paid some of its experienced plumbers £250,000 a year: good for them!).

The beauty of financial independence is that it removes the timesuck of having to work to pay the bills.  This allows you to explore options that might otherwise seem too risky or time consuming.

But I don’t think you need get to full financial independence to get most of the benefits.  Just being debt free with a frugal lifestyle gives you loads of extra options in life.  And if you can add even a modest Escape Fund then, as Del Boy used to say, the world is your lobster.

Here’s an example of a hidden option that may be relevant to some UK readers.  The lifetime allowance for pensions is being reduced from £1.25m to £1m. But you can take Fixed Protection 2016 which means that if you don’t contribute any more after 5 April 2016, you keep the £1.25m higher limit.  If you might hit the £1m limit when you take pension benefits in the future, taking Fixed Protection gives you the option of keeping the £1.25m higher limit.  It’s an option because it’s reversible at any time. So you can always choose to make more contributions in the future when you have more information and if you want to.

The option valuation model below is sourced from Professor Damodaran of NYU. The assumptions  can easily be changed in the model – feel free to play with your own assumptions.

Leave a Reply to The Escape Artist Cancel reply

← Baby steps for future millionaires (part 2)
Hey everybody! The Emperor is butt naked! →

Why the market went up. (Source: Morgan Housel)
Coconuts 🌴🥥
How to get run over...
2019 investment returns Image credit: @visualcap
At the @popupbusiness financial independence workshop with @alandonegan and @ken.okoroafor
Spent Thursday coaching and talking to people about money with @stretchingthecity