This post is a short extract from Steven Pressfield’s book The War of Art, which I’ve added to my list of recommended books.

The book is mainly about overcoming procrastination and self-sabotage (or what Pressfield calls “Resistance”). Part of this includes dumping consumerism and its associated distractions. All good stuff, but it’s not a book about Financial Independence. It’s really a book about what stops us becoming more creative and more productive.

The book touches on some big questions about human nature and our values. In one wonderful section, Pressfield compares and contrasts “fundamentalists” with “artists”.

He uses the term “fundamentalist” broadly to describe people trying to control others based on dogma.  They can include priests, politicians and ideologues in any field of human activity. They are certain that their way is the one true way.

He uses the term “artist” broadly, referring to anyone trying to create innovation or improvement including entrepreneurs, writers, dancers, students. These people are flexible and pragmatic, experimenting and learning as they go.

The point is not that one group of people are “good” and the other group is “bad”. No, the point is much more nuanced (and powerful) than that. The point is that we all have a bit of both in us. Obviously the mix between the two will be different in everyone.

The book reflects a lifetime of wisdom…so read it with an open mind…and preferably more than once.  🙂

The artist and the fundamentalist both confront the same issue, the mystery of their existence as individuals.

Each asks the same questions: Who am I? Why am I here? What is the meaning of my life?

At more primitive stages of evolution, humanity didn’t have to deal with such questions.  In the states of savagery, of barbarism, in nomadic culture, medieval society, in the tribe and the clan, one’s position was fixed by the commandments of the community.

It was only with the advent of modernity (starting with the ancient Greeks), with the birth of freedom and of the individual, that such matters ascended to the fore.

These are not easy questions. Who am I? Why am I here? They’re not easy because the human being isn’t wired to function as an individual.  We’re wired tribally, to act as part of a group. Our psyches are programmed by millions of years of hunter-gatherer evolution. We know what the clan is; we know how to fit into the band and the tribe. What we don’t know is how to be alone. We don’t know how to be free individuals.

The artist and the fundamentalist arise from societies at differing stages of development.

The artist is the advanced model. His culture possesses affluence, stability, enough excess of resources to permit the luxury of self-examination.  The artist is grounded in freedom. He is not afraid of it. He is lucky. He was born in the right place. He has a core of self-confidence, of hope for the future. He believes in progress and evolution. His faith is that humankind is advancing, however haltingly and imperfectly, towards a better world.

The fundamentalist entertains no such notion. In his view, humanity has fallen from a higher state. The truth is not out there awaiting revelation; it has already been revealed.  The word of God has been spoken and recorded by His Prophet, be he Jesus, Muhammed or Karl Marx.

Fundamentalism is the philosophy of the powerless, the conquered, the displaced and the dispossessed. Its spawning ground is the wreckage of political and military defeat, as Hebrew fundamentalism arose during the Babylonian captivity, as white Christian fundamentalism appeared in the American South during Reconstruction, as the notion of the Master Race evolved in Germany following World War I.

In such desparate times, the vanquished race would perish without a doctrine that restored hope and pride. Islamic fundamentalism ascends from the same landscape of despair and possesses the same tremendous and potent appeal.

What exactly is this despair? It is the despair of freedom. The dislocation and emasculation experienced by the individual cut free from the familiar and comforting structures of the tribe and the clan, the village and the family.  It is the state of modern life.

The fundamentalist (or more accurately, the beleagured individual who comes to embrace fundamentalism) cannot stand freedom. He cannot find his way into the future, so he retreats to the past. He returns in imagination to the glory days of his race and seeks to reconstitute both them and himself in their purer, more virtuous light. He gets back to basics. To fundamentals.

Fundamentalism and art are mutually exclusive. There is no such thing as fundamentalist art. This does not mean that the fundamentalist is not creative. Rather, his creativity is inverted. He creates destruction.  Even the structures he builds, his schools and networks of organisation are dedicated to annihilation, of his enemies and himself. 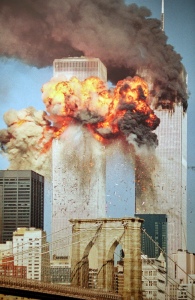 The fundamentalist is consumed with Satan, whom he loves as he loves death.

Is it co-incidence that the suicide bombers of the World Trade Center frequented strip clubs during their training, or that they conceived of their reward as a squadron of virgin brides and the license to ravish them in the fleshpots of heaven? The fundamentalist hates and fears women because he sees them as vessels of Satan, temptresses like Delilah who seduced Samsom from his power.

To combat the call of sin, ie Resistance, the fundamentalist plunges either into action or into the study of sacred texts. He loses himself in these, much as the artist does in the process of creation. The difference is that while the one looks forward, hoping to create a better world, the other looks backward, seeking to return to a purer world from which he and all have fallen.

The humanist believes that humankind, as individuals, is called upon to co-create the world with God. This is why he values human life so highly.  In his view, things do progress, life does evolve; each individual has value, at least potentially, in advancing this cause. The fundamentalist cannot conceive of this. In his society, dissent is not just crime but apostasy; it is heresy, transgression against God Himself.

When fundamentalism wins, the world enters a dark age.  Yet still I can’t condemn one who is drawn to this philosophy. I consider my own inner journey, the advantages I’ve had of education, affluence, family support, health and the blind good luck to be born  American, and still I have learned to exist as an autonomous individual, if indeed I have, only by a whisker and at a cost I would hate to have to reckon up.

It may be that the human race is not ready for freedom. The air of liberty may be too rarefied for us to breathe. Certainly I wouldn’t be writing this book, on this subject, if living with freedom were easy.

The paradox seems to be, as Socrates demonstrated long ago, that the truly free individual is free only to the extent of his own self-mastery. While those who will not govern themselves are condemned to find masters to govern over them.

I send out occasional emails out with my thoughts and what I’m up to. You can sign up for those emails below 👇