What if you put as much effort into your own finances as you put into your job?? 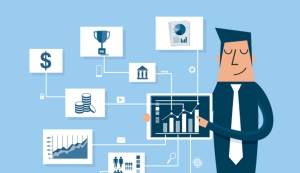 What if you were put in charge of an important project at work?

Imagine your company needs to build a new factory or software product or create an advertising campaign or dig a mine or change a major supplier or whatever.

Now imagine that your boss puts YOU in charge of the project.

Think about the amount of work you’d put into that.

There would be late nights and early mornings. You’d spend months, maybe years, working full time on the project. There would be powerpoint slides and a spreadsheet model. External advisers would be hired. There would be a steering committee with regular conference calls and meetings. Lots of meetings.

The process would have ups and downs. There would be problems to be solved along the way. There would be lawyers and bureaucrats that said it was too risky, sceptics who say that it will never work. There would be inertia and internal resistance. It would be messy and stressful at times.

But you’d give it your all and you’d get it done…because you’re that sort of person.  You’re a professional. And because your job, your career and your reputation are on the line, you’d find a way to make it happen.

And yet how much rigour to you bring to MAJOR life decisions? Decisions like:

So often we make big life decisions on autopilot or based on emotion : we have a hunch or just go with our feelings.  This is reinforced by phrases like “you’ll just know” or “go with what feelz right”.

But going with what feelz right is often a disaster.  Its not just that we’ve been brainwashed by consumerism (although we have). It’s also that your emotions deserve a healthy level of scepticism.

To be honest, until you’ve trained your monkey mind, most of your feelings are bullshit. Most of the bad stuff in life (bad relationships, carbs, drugs, consumer shit) gives you an initial “sugar high” and therefore feelz good. Most of us need to burn our hands on the stove a few times before we learn this lesson.

But it gets worse. What’s worse than making an imperfect decision? Making no decision. People often just duck choices altogether and procrastinate – telling themselves that they’ll come back to it…and never do.

A classic example in personal finances is ignoring your work pension choices. Here’s another: I often see people agonising over transferring their investments from one platform to another.  This is ironic as the transfer process should be (and in most cases IS) incredibly easy.

A lot of this money stuff is way easier than people realise. What’s the right fund? Which broker/platform? How do I transfer other funds from my old work pensions? That stuff is all easy and the answers are all freely available on this blog and others.

I’m not saying that getting to financial independence is easy. I’m saying that taking control of your money is a lot easier than the stuff that most of you do in your day jobs.

What’s the biggest thing that most people could do to get their spending under control? Keep a record of where it all goes. What’s the most common reason people give why they won’t do that? Too much effort required.

When it boils down to it, most of the tools and techniques of financial independence are about trying a bit harder. There’s a film called Get Rich or die Tryin’…well, I’d call it Get Rich and FI Tryin’.

You might ask: what’s the point of trying harder? The answer is happiness. Taking money worries off the table is a HUGE win for your happiness. And even if you’re not worried about money right now, you probably should be. Dig a well before you are thirsty.

But you’re too busy right?  Well, it’s no accident that The Prison Camp likes to keep us BUSY. That way we feel stressed, anxious, overwhelmed. That way we never stop to think about what’s important, about what we should do in our short time on this planet, what we might end up regretting. When we’re busy, we’re less likely to hatch plans to escape.

So people rush to do more and get more. People get jobs, buy stuff…lots of stuff…go on holidays where they tick off the sights, have children, run around after those children ferrying them from one activity to another stopping only to post the highlights on Instaglam. This constant busyness acts as another form of self-sabotage.

I’d like to say I’ve always been immune from this nonsense but that would not be true. For example, I chose the town I live in largely on emotional impulse. I didn’t really think through the implication of having a 3rd child…etc etc. Its ridiculous how little thought, logic and analysis I put into those decisions versus the effort I was putting into powerpoint slides and excel spreadsheets for clients at the time.

Financial independence requires you to act as Chief Financial Officer of your own life.  You need to put yourself in charge and start acting as if the buck$ stop with you.

Think about how much life force you put into working for The Man. One of the “secrets” of financial independence is applying the same effort and creativity to your own life.  I don’t mean the same number of hours each week but I do mean the same professionalism.

I was recently talking to a doctor who asked nervously how hard it would be to get financially savvy and manage their own portfolio. Well, compared to 7 years at med school or doing open heart surgery, I’d say it was pretty fucking easy.  It’s no harder to invest your own portfolio than it is to run an online bank account.

In The CFO’s Guide To Fridge Management, I showed how to apply the CFO mindset to slash your food bill. Given that about 1/3 of food is thrown away uneaten, most people have a lot of room for improvement.  Remember that £1/$1/€1 off your annual food bill reduces the amount you need for “enough” by £25/$25 /€25.

How do you bring the same level of rigour to your own life as you do to your job?  It’s not just one thing…so here are some suggestions:

Firstly, you need a powerful “why” to act as incentive.  Employment has carrots and sticks.  If we don’t show up, we lose our jobs. I only got really serious about saving money after a period where I thought I was gonna lose my job. What is your “why”?

You should show the same commitment to your saving and investing as companies do to their profits. You are not a local authority who gets a budget from central government and must spend every last £/$/€ by the end of the financial year or see your budget get cut next year. No, you should think like a company that gets revenue up, costs down and uses the profits to invest in the future and reward the shareholders (that’s you).

Secondly, write stuff down. Writing helps bring order to chaos. Writing forces you to organise your thoughts.  Spreadsheets are super useful for measuring your financial progress. But you should also have some sort of journal / written plan where you capture ideas, keep your to-do list and write down the pros and cons of big life decisions.

Third, teamwork.  Collaboration is a super-power. Companies put people in teams because it’s usually more effective. Get your other half on board with the programme. Find someone to talk to: a friend / family member / mentor that is prepared to challenge your plan and speak the truth to you.

Fifth, create your own incentive scheme. Use conditional rewards and treat yourself with simple pleasures (these are all we really ever have). One week’s work for The Man earns you two bottles of wine…etc etc. Choose your own rewards!

This brings us to the questions of how important should money be in our lives? And how much time should we spend on thinking about it?  This depends where you are on your journey.

Later, when you’re in a decent job, you’re paying yourself first and investing on autopilot. You can set it and forget it. You should keep an eye on your progress (maybe update your net worth once a month?). But now its mostly just a matter of keep doing the reps.

Eventually, when you are financially secure, you should be spending no time at all thinking about money.  You should see it for what it is…just a tool to do things with.  You are still allowed to be interested in investing but better to spend your time on people, relationships and experiences.

← Don’t be a Nice Guy, Be a Good Guy (Part 2)
The inestimable advantages of paying yourself first →