You’re only as strong as your weakest link

In the biblical parable of Samson and Delilah, Samson had great physical strength.

This strength allowed him to perform superhuman feats, including fighting a lion with his bare hands and massacring an entire army of Philistines (his enemies) using only the jawbone of a donkey(!).

Delilah, Samson’s girlfriend, was bribed by the Philistines to discover the source of Samson’s strength. After three failed attempts, she finally goads Samson into telling her that his vigor is derived from his hair. If Samson’s long hair were cut, then he would lose his strength.

As he sleeps, Delilah orders a servant to cut Samson’s hair, thereby enabling her to turn him over to the Philistines, who gouge out his eyes and force him to grind grain in a mill at Gaza. While there, his hair began to regrow.

When the Philistines took Samson into their temple, Samson asked to rest against one of the support pillars. After being granted permission, he prayed to God and miraculously recovered his strength, allowing him to bring down the columns, collapsing the temple and killing himself as well as all of the Philistines. Who doesn’t like a happy ending? 😉

The moral of the story is that you’re only as strong as your weakest link.

Samson was betrayed by his partner (it happens). I think it’s fair to say that Samson didn’t have quite as good a handle on his relationship as he thought he had. That was his weakest link.

And he wasn’t the only one. Many people have thought that they were financially set…only to get run over by the divorce industry. They may have done everything right from a purely financial perspective: optimised their careers, optimised their portfolios and micro-managed their spending. Their portfolio may have seemed rock solid…but they were focused on the wrong battlefield.

Don’t get me wrong, I’m as big an advocate of getting your finances in order as anyone. Once your compounding machine has been set up right, your money is like an army of employees that is working for you 24/7/365. But money isn’t everything.

Let’s say you were a star hedge fund manager getting paid a fortune and enjoying the intellectual kudos that came with outperforming your peers and your benchmark. This puts you in a very select group in terms of money, status and intellectual horsepower. But to me this would be a hollow achievement if it came at the cost of getting so out of shape that I couldn’t run up stairs, cycle to the shops or run 5k.

Or what if you had a stellar investment track record but were too nervous to stand up and talk in front of a small crowd (say 40 people)? Or go up and talk to an attractive woman at a party? You’re only as strong as your weakest link.

Being rich definitely has its advantages. There are some things that money is really good for. If you want to buy a new car or kitchen, money works really really well.

But money will not help you if your kids won’t talk to you or your spouse won’t sleep with you. Sorry, but that’s the reality. If you want to deepen your relationships with the people around you, all money can do is buy you some time and space to have conversations with those people. You still have to do the work and have the conversations…and those will not always be easy.

Life is often a shit show, as 2020 has neatly illustrated. Maybe the ultimate purpose of life is to try to find some happiness, meaning and peace in amongst the challenges? I’m not sure…but my point is that maybe it’s not supposed to be easy.

Life will always throw challenges at us to test us. And I don’t think that, as a society, we’re getting any better at dealing with those challenges. The Culture War is raging and people seem intent on throwing away the wisdom of our ancestors.

People used to be encouraged to be quietly stoic rather than openly discussing mental health issues. That taboo was probably unhealthy in many cases. Then the pendulum swung the other way. We all know that clothing fashions change quickly: flares one year, drainpipes the next. But humans have this weird way of making everything a fashion. Attitudes to mental health are just one illustration of that.

It’s now got to the point where some parade their mental illness (if that’s what it is) almost as a badge of honour. Victimhood may be in fashion currently but I think there are real dangers in making anxiety or depression an integral part of how you see yourself. We tend to live up (or down) to our reputation and to our identity.

What doesn’t kill you makes you stronger. I had my own experience with depression many years ago. I never went to see a doctor because I didn’t want to get stuck on some habit-forming pills that would treat the symptoms but not the cause. I have since met people that became addicted to anti-depressants who told me that was probably the best decision I could have made.

What I did was try to shake it off and learn from the experience: I experimented with diet and exercise and activities that seemed to make things better. No one (including doctors) can tell you what will work for you but I know what worked for me.

And that’s the main point: this stuff is all very personal to the individual.  All good advice is contextual: it depends on the people and the circumstances involved.

To illustrate this point, one of my financial coaching clients sent me this “wheel of life” chart (and kindly gave me permission to share it with you). The idea is simple: you just score yourself in each of the key categories and you look for areas of strength and weakness. Much of the value comes from first identifying and then addressing areas of weakness. 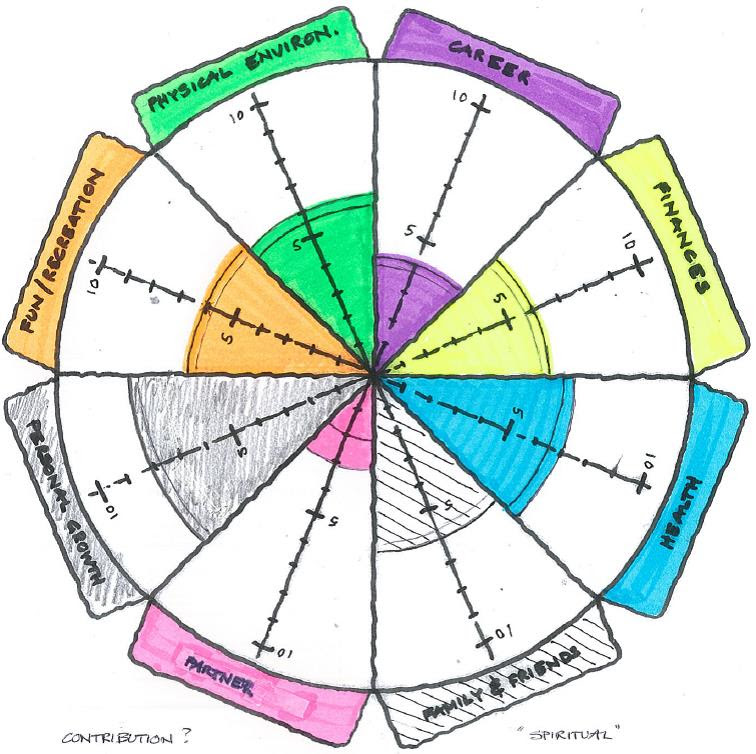 Work-life balance is another modern preoccupation that may have been taken too far. I’m not convinced that career success is really possible without trade-offs and sacrifices. I’m not sure that work-life balance is an appropriate goal in your 20s when you should be hustling to get established and develop your career.

But there is some truth in the concept of work-life balance. It’s possible for middle-class professionals to become too narrowly focussed. We live in a world that rewards (and hence encourages) specialisation. Tech, medicine, law, finance and business all reward people with rare technical skills and this can encourage every-narrower specialisation.

My point is that society and the economy already provide a structure that rewards people highly for focussing on their strengths. The problem comes if we focus on our careers at the cost of failure in other areas of life. It’s not easy to see your blindspots and you don’t know what you don’t know.

What is your weakest link?

This article first appeared as an email to subscribers on my email list. You can sign up to receive those emails below 👇

← Getting debt-free…treading lightly on The Earth
Every time you see a small business, someone made a brave decision →