The Elephant and The Rider

If you think that everyone uses logic for important decisions, you’re setting yourself up for a lifetime of confusion.

Sure, we like to think of ourselves as logical creatures.

But a quick look at history, evolution and physiology reveals this to be incomplete at best, misleading at worst.

Consider the evolution of the human mind. We evolved from single cell organisms to fish to reptiles to mammals to monkeys over millions of years.

Then sometime in the last 100,000 years or so, we developed speech, language, verbal reasoning, mathematics and computer science. It’s only in the last 10,000 years that the agricultural revolution happened.

The human brain reflects this. It’s like a sprawling city that got built in stages with different districts added on haphazardly at different times: an ancient centre, a new town and modern suburbs.

We can think of the human brain as composed of 3 parts:

Jonathan Haidt, professor of psychology at New York University, refers to 1. & 2. together as The Elephant and to 3. as The Rider. 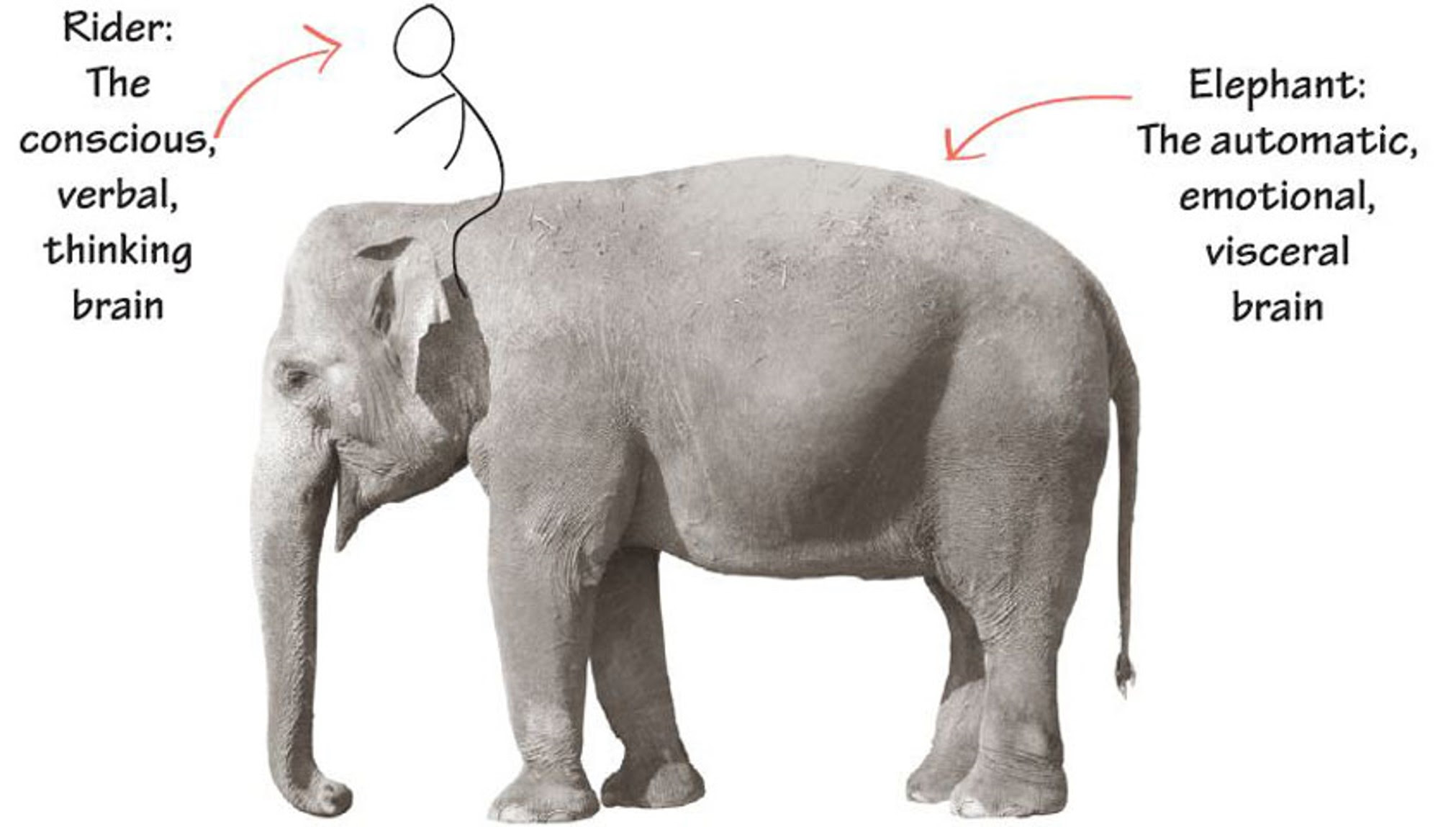 Haidt observed that people rarely change their beliefs / religion / politics despite getting new information. He realised that the important stuff was decided by The Elephant and then justified by The Rider.

Reason is the servant of intuition and emotion. The Rider was put there to serve The Elephant. Remember that The Elephant came before The Rider in evolutionary history. So The Rider must have improved The Elephant’s chances of survival and reproduction.

The Rider may not be able to persuade The Elephant but perhaps it can convince other riders? Haidt suggests that the rational mind was most useful as a persuader for other people.

Once human beings developed language and began to gossip about each other, it became extremely valuable for elephants to carry around on their back a full time public relations firm.

Jonathan Haidt, The Coddling of The American Mind

Have you ever wondered why companies spend billions on adverts that often seem banal and illogical? Advertising and marketing is powerful because it works on The Elephant not The Rider. It plays to our herd emotions not to our logic or reason.

The most effective claim in advertising is that product X is the most popular brand (not the best). Remember that The Elephant is a herd animal. There is safety in a herd. Following others on autopilot is easy. Analysis is hard.

The Elephant and The Rider concept also helps explains a lot about investing. Why do investors herd? Why do we over-trade? Why do we panic-sell during stockmarket crashes? Even people that have read all the books about being a long term buy and hold investor. Because The Rider is weak and The Elephant is strong.

It is one thing to know something intellectually and something else to know it in your heart or gut. If you read something, you may think you understand it. But you only really understand something if you take action and follow through.

You are most effective when The Elephant and The Rider are working together and want to go in the same direction. That’s why this blog is about changing The Elephant as well as The Rider.

To change the way The Elephant thinks (or rather feels) is not easy. It takes repetition for new ways of thinking to sink in. This is why I say that repetition is a feature not a bug on this website.

Similarly, it takes time for The Elephant to absorb new ideas. Even if The Rider is really smart and a fast learner, The Elephant takes much longer to process new priorities and new ways of thinking. The hardest thing (and therefore the slowest) is where The Elephant has to unlearn what it has previously learned.

Haidt is a great advocate for free speech, scientific enquiry and academic debate. His reason? Sometimes other people can do for us what we cannot do for ourselves: they can challenge us, giving us reasons and arguments that trigger new intuitions, thereby making it possible for us to change our minds.

This is why it’s good to talk.

← There is no such thing as 100% safety, there are only trade-offs
You can’t control The Outcome, you can only control The Process →