In Part 1, We covered how different classes of risk asset (equities, venture capital and crypto) have started to converge. In this Part 2, we cover how the regulation of crypto will converge with that of the existing financial system.

I don’t want to alarm anyone but the current financial system is screwed.

The good news is that a new financial system is being built in the background. Most people just don’t realise it yet.

The legacy financial system (pension funds, banks, insurance companies) can be thought of as a bunch of promises (some explicit, some implicit) that were made to people in the past.

This includes promises of future pension income, insurance payouts and promises that banks will not go bust (and you can get your deposits back anytime) and promises that your cash and bonds will maintain their purchasing power.

Not all of these promises can be kept. The promises depend on an enormous mountain of debt, much of which is bad debt that can not be repaid.

I worked in financial restructuring for 6 years in a period that included the global financial crisis of 2008/09. When you work in corporate finance and restructuring, you get frequent reminders that not all promises can be kept. When debt is too high and things don’t go as planned, someone has to eat the loss.

Some debt will get restructured but cash savers and holders of government bonds will take much of the loss via inflation.

The debt mountain rests upon a layer of collateral (assets used as security for the debt).  Much of that collateral was government bonds which used to be thought of as “risk free”. A country that issues bonds in its own currency should never default because it can simply invent new money to make payments to bond holders. So there is a Magic Money Tree for governments that issue their own currency.

The risk free rate in global financial markets was the interest rate on US Treasury Bills (government bonds). They had minimal default risk and all other dollar-denominated credit instruments were priced off a yield uplift to the rate available on these “risk free” assets. Higher risk debt yielded a higher return to compensate for the risk.

This explains why we see what look like bubbles all around us right now. Look at the CAPE on the S&P 500. Look at property prices. Look at crypto. Look at NFTs (a bubble within a bubble).

How long can this go on for? Well the money printing has been going on ever since the global financial crisis in 2008. And it can keep going for longer than permabears, preppers and gold bugs expect.

People want more free stuff and they want lower taxes (or higher taxes that other people pay). So the chances that Western Governments balance their books (where spending = taxation) and stop adding to government debt every year seems close to zero. The UK last ran a budget surplus in 2000.

The American federal deficit in 2020 was $3.1 trillion, equal to 15 percent of gross domestic product. The shortfall was made up by a mixture of borrowing and money printing.

In 2020 America expanded the base money supply by 25%. In other words, it conjured out of thin air 25% of the dollars that had previously been in existence. Money printer go BRRRRRRR. 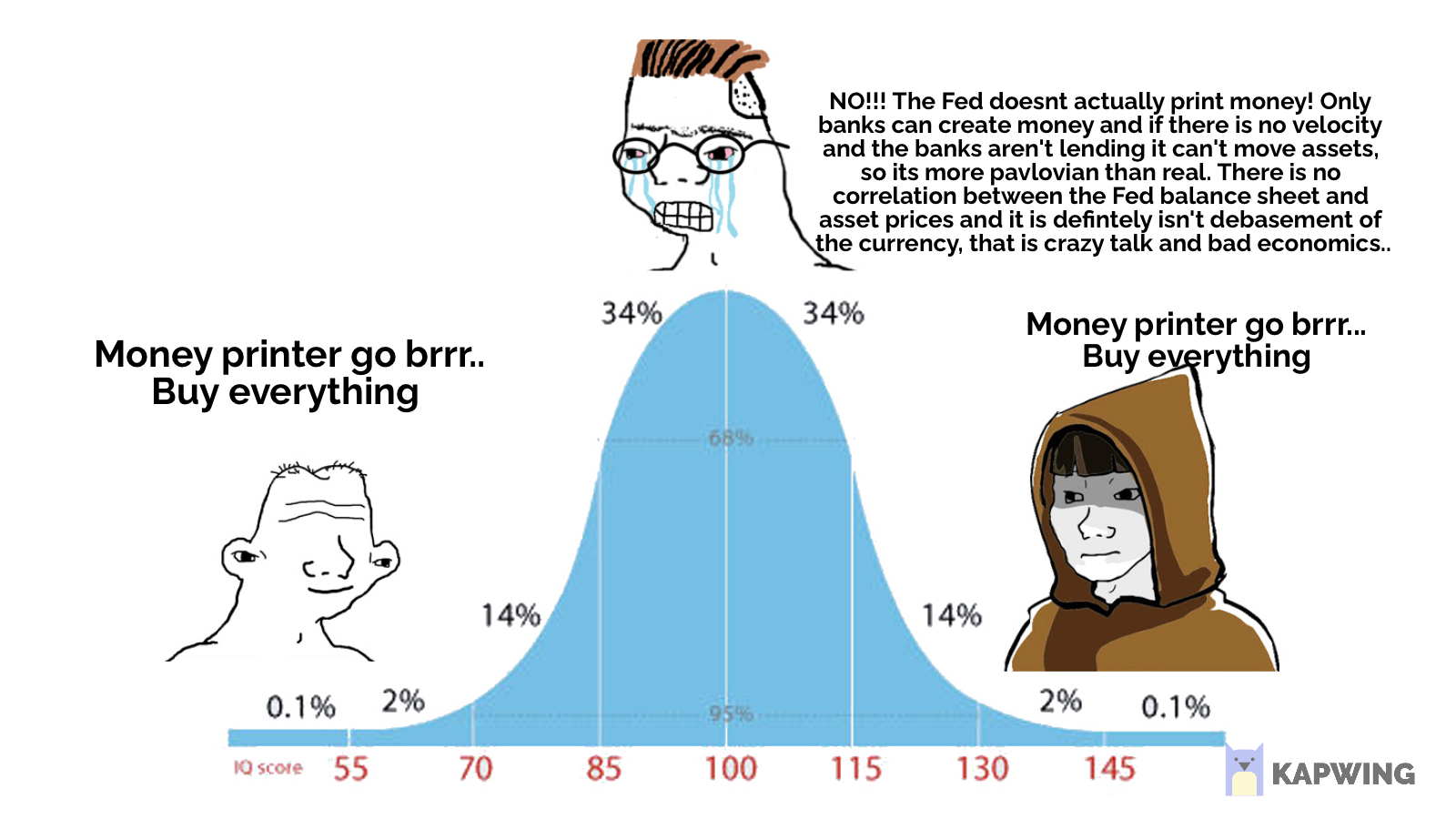 Savers stuck in cash and bonds in the old system will get boiled in the pan like the proverbial frog. Their purchasing power gets eroded over time by inflation without them realising what is going on.

Money printing shows up as real asset price inflation. It shows up as housing booms and equity bull markets. It may or may not show up as consumer price inflation (the price of food and fuel etc which is how most people think of inflation).

What’s happening right now is the biggest transfer of wealth in human history. But it’s a transfer of purchasing power rather than nominal pounds or dollars. It’s a gradual transfer from old forms of money to new forms of money.

I am not here to depress anyone. I’m not here to sell you insurance, shotgun cartridges or Zombie repellant for the forthcoming apocalypse.

The stuff above is just the reality of the world today. It is what it is. What can we do about it?

There will be big winners and losers. Those that are early will make out like bandits. That’s partly because the early adopters are bearing risk (e.g. the risks of technology failure, regulatory risk, price volatility etc). It’s partly because they are adding value to the world (creating new technology and a new financial system is not nothing) and it’s partly due to seigniorage.

What is seigniorage? It’s the profit for people that create new money. Think about a £50 pound note: if it costs 25p to print that banknote, the gain to the government that created it is £49.75. Now think about someone mining Bitcoin in 2011: if it cost them 25p of electricity to get a Bitcoin with a market value of £50 (or whatever it was back then), the seignorage gain was £49.75. That’s ~200x your money.

If new forms of money (or stores of value) get widespread adoption, the creators and the early adopters benefit. People can rail against this and call it a Ponzi scheme if they want (and, to be fair, Bitcoin did look like that to me for several years). It is what it is.

Bitcoin is a software project that created a digital store of value. Ethereum added the functionality of smart contracts (conditional agreements that could be put onto blockchains and transacted via software code without centralised intermediaries). New tech, new applications and new platforms will add to these. No single asset, platform or blockchain will rule the world.

The old financial system and the new will converge. Goldman Sachs, JP Morgan, Paypal and VISA etc now have crypto teams and offerings. If you are convinced that crypto is just a fad, it’s worth asking yourself: in what way are Goldman Sachs are wrong?

Over time, digital assets will be further integrated into the legacy financial system and the regulatory regime. This will require some changes by crypto developers and new legislation by governments and regulators. But these 2 worlds have already started to converge.

Since January 2020, any crypto exchange operating in the UK must register with the FCA under anti-money laundering rules. This means an exchange must check who its investors are and verify their identities to ensure it is not supporting criminal activity or terrorism.

In future, the leading crypto exchanges will be fully regulated entities that will offer you the ability to trade not just crypto but also funds, stocks, commodities, bonds, FX and other financial assets.

You will be able to go to a crypto platform and buy a global equities index tracker fund. You will get a choice between buying the fund in synthetic token form or in traditional physical form.  At some point, the distinction between those 2 forms will no longer be meaningful (no one will own paper share certificates).

The process of regulatory convergence may be a bumpy ride. Mistakes will be made. There will be frauds, failures and fuck-ups. Some software developers will get pursued by the regulators. Some companies, regulators and government agencies will make mistakes…they always do. But we should be realistic…why would you expect a smooth ride for such big changes?

Innovation must always overcome resistance because change unsettles people. This is why the future always seems scary…even when things are getting better. What’s different now is the scale and the speed of the changes that are coming. Are you ready?

To receive all new articles, join my email list:

Are you taking enough risk in your career and in your investing?
Why it feels hard sometimes
Let's go outside! ☀️ 🚴
New post: There Is No Such Thing As 100% Safety, There Are Only Trade-Offs
And now in military green...